We shot, edited, and posted our biggest comparison video in the Philippines to date. Five pickup trucks – the Chevrolet Colorado, Ford Ranger, Mitsubishi Strada, SsangYong Musso Grand, and Toyota Hilux – were brought by us to the upper reaches of Luzon to take on the monumental task of finding the best pickup that you can buy today. Seeing as pickup truck sales account for over an eighth of total unit sales in the Philippines, we just had to make a video about these do-it-all vehicles. The task was so daunting that the man with a plan, Caco, had to sit back, relax, and have a few beers after the work was done.

So most of you are wondering and thinking of violent ways to punish Caco because fan-favorites like the Nissan Navara and Isuzu D-Max aren’t present. Don’t fret, there’s more on the horizon, and since you’re already here, you’re the lucky viewer who gets a sneak peek of what we’re planning in the future. Let’s explain the system in which we used to test these cars. Jacob, our senior car reviewer was able to get behind the wheel of most of these trucks. We had him tag along to give his insights and another perspective when it came to scoring. Earl and our other content writer, Joey, tagged along to drive the cars and also give input alongside the rest of the team who had their own thoughts that went into the final decision-making process. Caco was behind the wheel of all of these cars, and he had the final say for many things.

The winner per category gets a total of five points. The second-best pick gets four, while third place gets three and so on and so forth. This carried on to all of the categories we presented in order to determine which vehicle came out on top. We omitted the 200M dash from the scoring because there were quite a few variables that came up on the day of shooting, it wasn’t a scientific test, but it was a heck of a good time. Our decision to give the Ranger second place was met with much agreement from the team. We said that the other pickups did look good in their own right, but the Ranger was definitely taking a top spot. We couldn’t put it in first place for this category because Ford Philippines hasn’t updated the face of it in so long. The honor went to the Mitsubishi Strada, possibly a future classic thanks to its Dynamic Shield design, which breathed new life into Mitsubishi’s entire lineup.

The Hilux bagged third place because the Conquest trim does well to bring out the pickup’s tried and tested workhorse styling. The Colorado came in fourth and was pretty close to the Toyota in terms of exterior design. The Chevy got beat out because it was the only pickup of the bunch to come with halogen reflectors instead of projectors. The Musso Grand is last in this category, sadly. While the styling works for its SUV counterpart, the same proportions might not be the best for a pickup truck, after all, the Rexton platform that was adopted for this vehicle was designed to be an SUV. The large bed in the rear is a little jarring, and the wheel arches seem minuscule because of this big proportion. 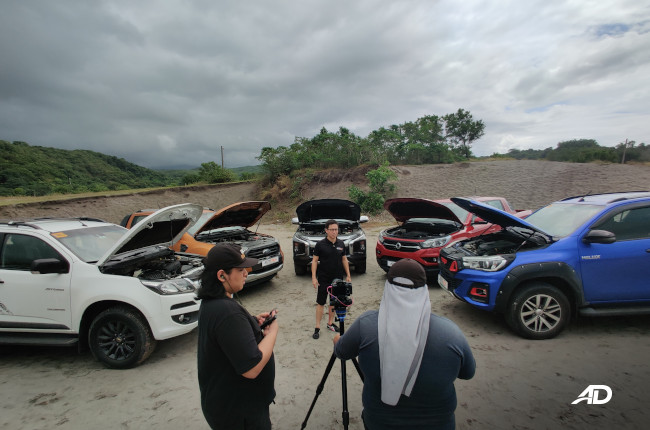 An average consumer will value fuel economy more than outright performance. All the pickups we brought were already capable performers thanks to the big amounts of torque, coming from the diesel engines, but even the engine with the highest horsepower and torque didn’t produce the best fuel economy figures. The Strada has a 2.4L with 179 hp and 430 Nm of torque mated to a 6-speed automatic transmission, and it produced the best fuel economy at 17.9 km/L. The second-place winner in this category is the Toyota Hilux with a – slightly worse – score of 17.2 km/L on the highway. The Toyota has the same number of gears as the Mitsubishi, but its engine displacement is at 2.8L with 174 hp and 450 Nm of torque.

The other cars produced good figures, and we were surprised that the 10-speed automatic that the Ford Ranger has didn’t allow its 2.0L Bi-turbo engine to eke out even more fuel economy, even if it does have 210 hp and 500 Nm of torque – the most powerful of the bunch. We will, however, test this figure in our upcoming comparo so stay tuned. After the Ranger, Colorado sits in fourth place and the Musso Grand in fifth, as per our testing.

One glance and you see that the SsangYong Musso Grand’s interior is a symphony of brown and black, proving that pickups can be classy. The Ranger took second with a cabin filled with personality thanks to the Wildtrak orange stitching found all over the seats, dash, and steering wheel.

Mitsubishi’s Strada is third because the interplay of gray and black in the cabin does well to give the interior an interesting look and feel. The seats also felt comfortable with bolsters and support in the right areas. The Colorado comes in fourth because of its simple utilitarian design. This could be a good thing for others, but its seats are leather-clad and feel very durable, which are the main traits that were given some merit. The Hilux doesn’t come with leather upholstery or power seats. Piano black plastics are everywhere as well, which is a scratch-prone material that should be nowhere near a car that can conquer a dirt trail.

The Ford Ranger has it all. The head unit is intuitive and easy to use, thanks to Apple CarPlay and Android Auto, adaptive cruise control is also included in the package, and Ford even has a rear park assist and tailgate assist. Chevrolet gets close – really close – to the Ford. It has a remote start/stop system that is very useful when you need to cool down your cabin after a long day being parked out in the sun.

While the Strada lacks when it comes to the infotainment system, Mitsubishi paid top-dollar for some of the best safety features around. This offsets the disadvantage the SUV has in this category. On the contrary, the Musso Grand enjoys a good amount of tech features and has Apple CarPlay and Android Auto, but it is lacking in terms of safety systems. Toyota comes in last because of a rather basic infotainment system with only some toys for the back row. It also had no power seats. A backup camera is a must in this day and age and was the final nail in the coffin for us. 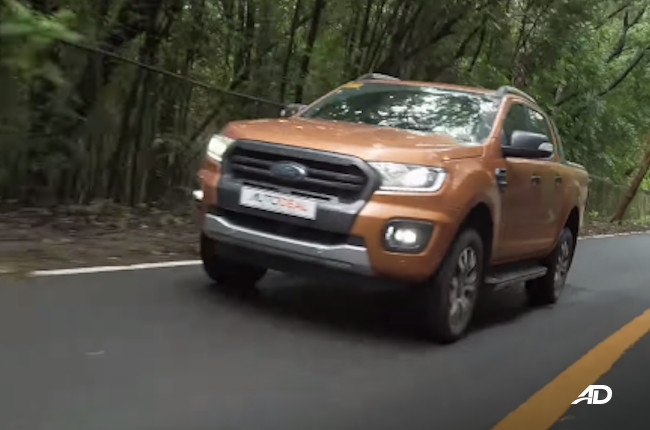 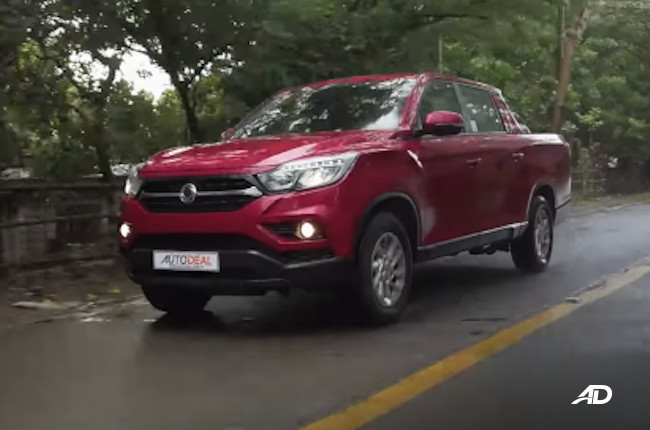 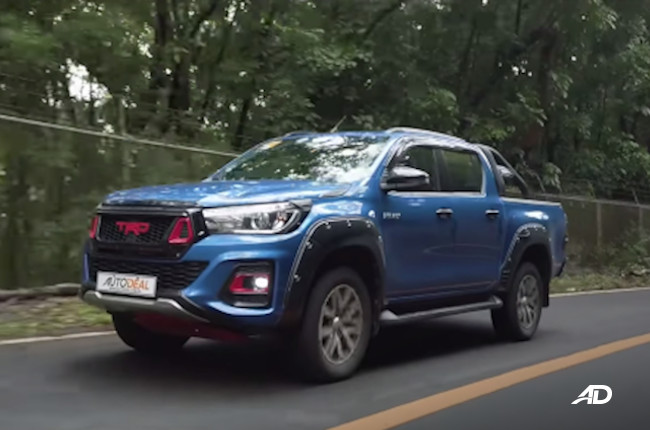 The Musso Grand has a lot of refinement in the cabin and features some of the best NVH. It also has a refined diesel engine that nudges you forward but lacks some punch netting it four points. While it did less-than-stellar results in terms of its fuel economy, the Ford Ranger is without a doubt, the best driver of the bunch. You do feel the 500 Nm of torque pushing you in your seat, and the 10-speed automatic transmission doing its work, but the power delivery is smooth, and it has a cabin that is well insulated from sound too with a body that has little-to-no rattles.

A torquey motor sits in the Hilux, and it does have a good response, but with standard NVH and comfort, it nets it a third-place finish, which means it serves as the benchmark for how most pickups should drive. This leaves the Strada in fourth because of some rattles here and there, while the last place belonging to the Chevrolet Colorado, even with its 200 hp, 500 Nm engine; the driving feel was just not as refined as its rivals.

Because it was raining, we were biting our nails with much anxiety because Caco was jumping from bed-to-bed. Thankfully no skidding happened.

Bed volume is logically more favored. Most of the time, users won’t be able to utilize the entire payload capacity of a pickup, and bulky items will rarely reach over a ton in weight. So we gave this category to the Musso Grand. Weight is still a factor though, so we still gave the Ranger four points.

The rest of the decisions came based on bed size and payload capacity. The third is the Colorado, fourth is the Hilux, and last is the Strada. 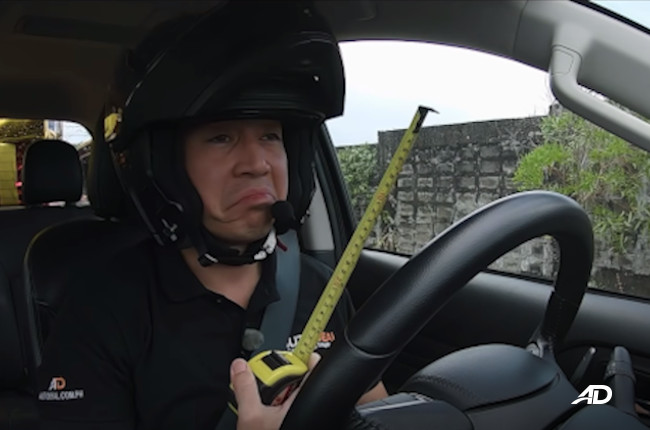 This segment wasn’t as fun as it looked. Preparations were made for the Christmas gifts about a day in advance. The whole team made efforts to wrap boxes up in order to load onto the pickups. The rain created puddles and a loose surface for extra cinematic effect, but then everyone was scrambling a little between shots in order to change cars and load the boxes up again and again.

Ultimately, we didn’t factor this portion of the review because it didn’t seem like a fair comparison of the capabilities of the pickup trucks given varying reaction times, a variable launching surface, and minute details like the timer’s reflexes, and the 90-degree turn that Caco had to execute with varying degrees of proficiency.

The Chevrolet Colorado has a bevy of toys to play with, and it is the most affordable top-spec pickup in the comparison. At 1,638,888, it undercuts everything else, and still got a second-place finish in the Tech and Safety segment. The Ranger takes this one though since you do get some of the best refinement in the segment for about P60,000 more, at a price tag of just P1,695,000 – not to mention adaptive cruise control and lane-keeping aid on a pickup truck. It’s hard to beat that, really.

The Musso’s interior refinement made its P1,650,000 seem like a bargain, while the Strada’s safety systems and fuel economy make its P1,670,000 price tag seem worthwhile. In the last place is the Toyota Hilux, it commands a P1,792,000 price tag, but is missing key features. 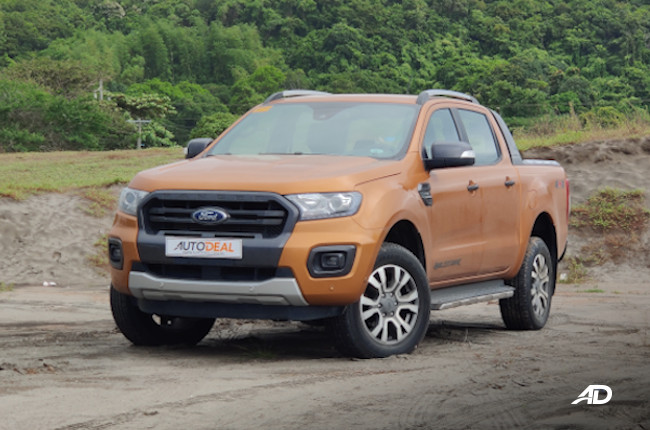 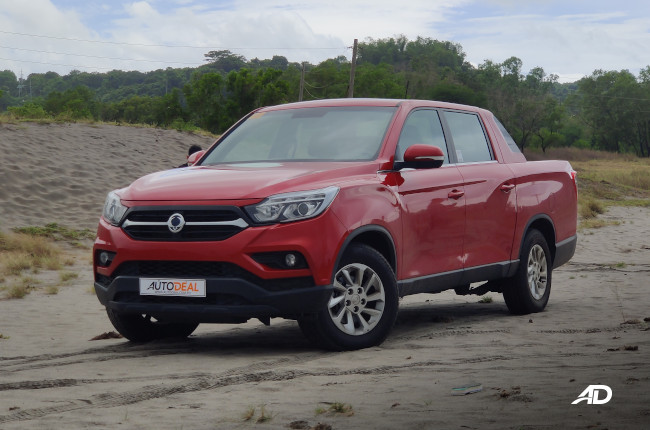 Coming to a conclusion was made easy because of the points system. When all was said and done, we let the scores do the talking. Looking at the spec sheet, the Ranger does win, but perhaps you’d like a better interior? Or a differently styled exterior? Or maybe you’d want something that is just affordable and capable at the same time? Each of these trucks cater to different consumers each with their own priorities. We half-meant our “everybody wins” statement because at the end of the day, the consumer wins given options like these.

Based on points, the Musso Grand and the Strada both get 21 points, making both of them runner ups, and with a 30-point finish, the Ranger is our pickup comparo champion – that is, until we get the rest of its rivals out for another video. Stay tuned. 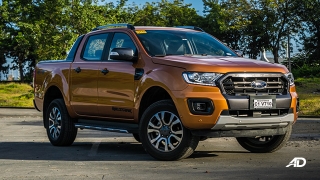 Brute & Techy – The Ford Ranger comes equipped with updated technology while still being capable of getting "dirty."

Get Notified about Ford Deals